A Comprehensive Guide To PE Structure, The Layman’s Way 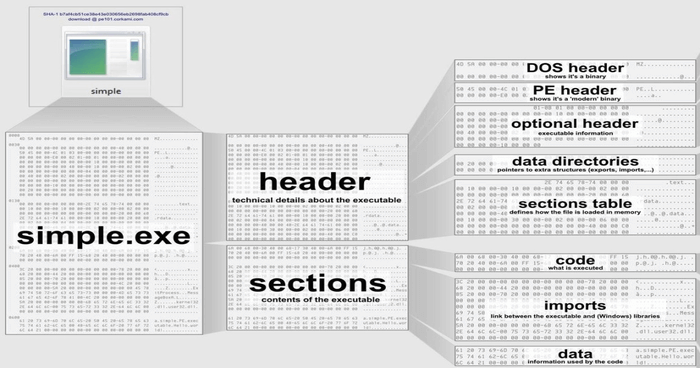 Hello readers! In this article, we will look at the PE Structure which is very much important in understanding the internal part of an executable file. Once you have an overall idea about what's inside the executable file and how that executable file works in Windows it will then become easy for you to analyze any executable file as you advance the journey to the Malware Analysis path.

Hopefully, this article will make you understand the overall scenario as to why I wrote this up and what's the importance of PE Structure while analyzing any malware binary. Also, I would try to keep this post as simple as possible since I am assuming that you are new to this exciting world of Malware Analysis and I don't want you to get overwhelmed. So, let's get started.

Each executable file has a common format called Common Object File Format (COFF), a format for executable, object code, shared library computer files used on Unix systems. And PE (Portable Executable) format is one such COFF format available today for executable, object code, DLLs, FON font files, and core dumps in 32-bit and 64-bit versions of Windows operating systems. And if you ask me what's on the plate for Linux then? Well, we have an Executable Link File (ELF) format for Linux. Since I have dedicated this post to the Windows PE headers, I will discuss ELF format in some other posts later.

PE format is a data structure that tells Windows OS loader what information is required to manage the wrapped executable code. This includes dynamic library references for linking, API export, and import tables, resource management data, and TLS data. The data structures on disk are the same data structures used in the memory and if you know how to find something in a PE file, you can almost certainly find the same information after the file is loaded in the memory. It is important to note that PE files are not just mapped into memory as a single memory-mapped file. Instead, the Win32 loader looks at the PE file and decides what portions of the file to map in.

A module in memory represents all the code, data, and resources from an executable file that is needed by a process. Other parts of a PE file may be read, but not mapped in (for instance, relocations). Some parts may not be mapped in at all, for example, when debug information is placed at the end of the file. A field in the PE header tells the system how much memory needs to be set aside for mapping the executable into memory. Data that won't be mapped in is placed at the end of the file, past any parts that will be mapped in.

Let me explain these data structures with the help of an example. So, I am taking an example of Calculator (calc.exe) here which I'll be opening in Hex Editor (HxD). You can grab this handy tool from here.

MZ is the initials of Mark Zbikowski, one of the developers of MS-DOS. This field is called e_magic or the magic number which is one such important field to identify an MS-DOS-compatible file type. All MS-DOS-compatible executable files set this value to 0x5A4D i.e. “MZ” in ASCII.

The final field, e_lfanew, is a 4-byte offset (F0 00 00 00) and tells where the PE Header is located. Check the PE header section below for this offset location.

A stub is a tiny program or a piece of code that is run by default when the execution of an application starts. This stub prints out the message “This program cannot be run in DOS mode” when the program is not compatible with Windows. So if we run a Win32-based program in an environment that doesn't support Win32, we will get this informative error message.

The PE header is located by looking at the e_lfanew field of the MS-DOS Header. The e_lfanew field gives the offset of the PE header location. The field e_lfanew denotes the file header of the new .exe header. The main PE Header is a structure of type IMAGE_NT_HEADERS and mainly contains SIGNATURE, IMAGE_FILE_HEADER, and IMAGE_OPTIONAL_HEADER.

SIGNATURE: This is the 4 bytes Dword signature. In this case, the offset set for the PE header is 000000F0 and the PE signature starts at 50 45 00 00 (the letter PE followed by two terminating zeroes).

IMAGE_FILE_HEADER: The file header is the next 20 bytes of the PE file and contains only the most basic information about the layout of the file.

The above-highlighted part of the image signifies the file header of any portable executable file.

The fields of the Image File Header are as follows:-

IMAGE_OPTIONAL_HEADER: One should not assume from the name itself that this is an optional header and is not a relevant one. This header contains some critical information that is beyond the basic information contained in the IMAGE_FILE_HEADER data structure. Some of the important fields that one should be aware of are listed below:-

IMAGE_DATA_DIRECTORY: The data directory field indicates where to find the other important components of executable information in the file. The structures of this field are located at the bottom of the optional header structure. The current PE file format defines 16 possible data structures, out of which 11 are currently used.

Below are some of the data directories:

The data directory is another important concept that one should be aware of. As I don't want to make this post lengthy for you. I have covered the Data Directory topic in a separate post mentioned below:

Section Header Table is an array of IMAGE_SECTION_HEADER structures and contains information related to the various sections available in the image of an executable file. The sections in the image are sorted by the RVAs rather than alphabetically. Sections Headers Table contains the following important fields:

One thing to note is that the author can modify the names of these sections. However, in a general scenario, the above mentioned are some of the common names of specific sections but one shouldn’t imply that they will always be used with the same name or for the same purpose. And because the array is only 8 bytes long, PE section names are limited to only 8 characters long. Their maximum length is 8 ASCII characters, and each section has its characteristics (access right permissions in memory).

The .edata and .data Sections

Among the above-mentioned common sections available in any PE file, it also includes other important sections as well, namely .edata and .idata, which contain the table to exported and imported functions. The export directory and import directory (directory entries under Optional Header) entries in the DataDirectory array refer to these sections.

The .idata sections specify which functions and data the binary imports from the shared libraries or DLLs and the .edata section lists down the various functions and their addresses that the DLL will export to be used by other binary files. 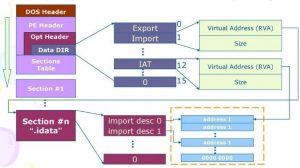 Exciting Journey Towards Import Address Table (IAT) of an Executable 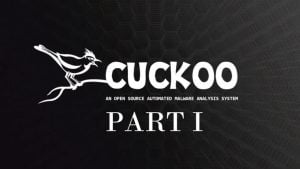 How To Get Cuckoo Sandbox to Work Perfectly – Part 1