By Satyajit Daulaguphu on Tuesday, August 27, 2019

Earlier, I wrote a post on “Understanding PE Structure – The Layman’s Way” and this one is a continuation to that post. I highly recommend my readers to go through that post, where I have gone detailed into the PE file format, before jumping onto this article. Since the earlier post was already too long and I hadn’t gone into much detail about the Data Directory structure of PE, I decided to continue from where I left off in this . And thought to go in deep and provide you with a better understanding of an Import Address Table and its important concepts.

This is done in order for the operating system to start the executable file successfully. But how this DLL loading is done and function is imported? We are going to see in this post.

Here, we will discuss only the important field and structures of the PE File format which is relevant to this topic as I don’t want this post to be too lengthy to be exhaustive for you.

Let’s Begin From Where We Left Off

In the earlier post, I have not gone into much detail about Data Directories which is just another array of structures called IMAGE_DATA_DIRECTORY.

Just to give an overview of Data Directories, it is the last entry of the Optional Header and what it really is an array of several other structures. This is one of the very important data structures because this is what holds the pointer to other data structures.

So, the last field of the IMAGE_OPTIONAL_HEADER structure is the so-called IMAGE_DATA_DIRECTORY where we locate the Import Address Table (IAT). The data directory field indicates where to find the other important components of executable information in the file. Below are the few data structures showing only the important ones.

Since our total focus here is on looking up the Imports of an executable file or to say what functions it has imported from other modules, we will take up the 2nd entry of the DataDirectory array which represents the Import D.

Each data directory entry specifies a relative virtual address and size of the directory. The VirtualAddress member in this array element describes the location of the import directory which in turn is also an array. This array consists of structures of type IMAGE_IMPORT_DESCRIPTOR. One structure of this type is assigned for each DLL that is imported by the module.

The Import directory entry of the import table takes us to the position of the import table inside the file image and is a container of several important data structures like Characteristics, OriginalFirstThunk, Name & FirstThunk and these are one per DLL. So, every single DLL will have its own IMAGE_IMPORT_DESCRIPTOR table. IMAGE_IMPORT_DESCRIPTOR structure is defined in WinNT.h file as below:

On-disk both OriginalFirstThunk (INT) points to the same data structures i.e. IMAGE_THUNK_DATA, that of the FirstThunk (IAT) but in memory, it flips around and points out to the other DLLs. Refer to the images below:

The IMAGE_THUNK_DATA structures within the IAT serves two purpose. In the executable file they contain either the ordinal of the imported API or an RVA to an IMAGE_IMPORT_BY_NAME structure.

Now, to know whether the function is imported by an ordinal or by its name, one must check the high bit of the IMAGE_THUNK_DATA value:

So, What’s the difference between IAT and INT?

INT is another array that is identical to the IAT and is also an array of IMAGE_THUNK_DATA structures. As both points to the same data structure, the main difference between the IAT and INT is that INT isn’t overwritten by the Windows loader when the executable is loaded into the memory but IAT entries get overwritten with the actual address of the imported function.

In the next article, we will actually try to look inside the Import Address Table (IAT) with the help of WinDbg or some other tools but it will be more of a practical as we are already done with theory. 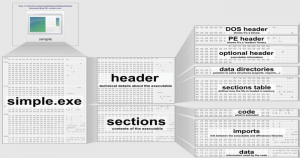